We’re calling it: Foil packs are the new go-to summer dinner. Whether you love the thrill of the grill, the ease of the oven, or cooking outdoors on a campfire, foil packs make mealtime simpler than ever—and the best part? There’s zero cleanups. Here are all the details on how to rock the season’s best-kept dinnertime secret.

How to Fill + Fold a Foil Pack

The first secret to success in cooking with foil packs is in the filling and folding of the pack itself. Thankfully, it’s easy to do, and follows the same general guidelines no matter what goes inside.

Place the food in the center of each piece of foil. Make sure to place even amounts of the prepared food into each foil pack so they can cook evenly and in the same amount of time.

Bring up two sides of foil over the filling so the edges of the foil meet. Seal the edges, making a tight 1/2-inch fold. Fold again, allowing space on the sides for heat circulation and expansion. Fold the other sides to seal the pack.

Foil Packs in the Oven

One of the easiest ways to cook foil packs is in the oven. Whether you want to bake an all-in-one meal, don’t have a grill or want to make dinner without making a mess, foil packs are a stress-free way to get food on the table.

How to Test Foil Packs for Doneness

Before baking, write an “X” in permanent marker on the foil pack with the largest piece of meat or vegetable. To test foil packs for doneness, open the pack with the “X” on it just slightly, and insert an instant-read thermometer into the center of the meat. When it comes to chicken, generally speaking the temperature should read 165˚F when it’s fully cooked through; for ground meats, the temperature should read 160˚F. For a complete guide on doneness temperatures, refer to the USDA guidelines. To test vegetables for doneness, use a paring knife and cut slightly into the largest, densest vegetable (such as a potato); the vegetable should be tender.

How to Convert Grilled Foil Pack Recipes to the Oven

Most of our recipes offer instructions for cooking foil packs on both the grill or in the oven. But in some cases, the recipe only calls for the grilling method and, if you don’t own a grill, this could pose a problem. Thankfully, it’s easy to convert a recipe from the grill method to the oven.

It’s fairly safe to convert a foil pack recipe from the grill method to the oven method; however, converting from oven to grill is a little trickier. Because recipes developed for the oven method likely include ingredients or methods that don’t stand up as well to the intense direct heat of the grill, it’s best to follow the original method instructions for the recipe and bake the foil packs in the oven. 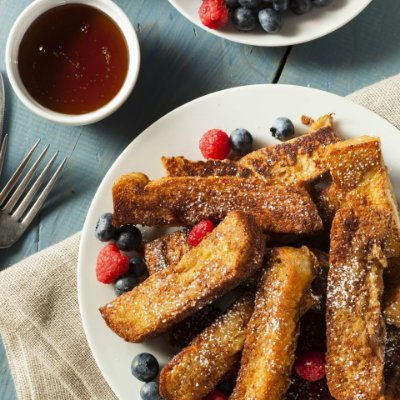 Give French toast an extra muscle-building kick with this sweet breakfast recipe that's high in protein and big on flavor!  Gone are the days when French Toast was seen as a high-carb, sugar loaded, cheat meal, and bring on the days of high-protein, easy to fit into any diet

This recipe uses the following Do You Bake? Products

Step 1 : Make your Do You Bake? KETO Bread mix according to Package directions. Let cool. Cut into 10 to 12 slices and let sit on the counter overnight (you want your bread to lose some moisture)

1. Empty all above ingredients into a blender and blend on  HIGH until fully combined

2. Pour mixture into a bowl

4. Add a few slices of bread strips at a time to your bowl. Coat bread. Only 10 seconds or so will do

6. Brown bread on each side until egg mixture is cooked through and bread is slightly fluffy

7. Plate and serve with fresh berries and sugar free syrup of choice

If you aren't following a KETO diet, you can easily swap this recipe for any other bread. We prefer to make our own bread and for the highest nutrition, we would choose our Fmaily High 5 N Grain Yeast Bread.