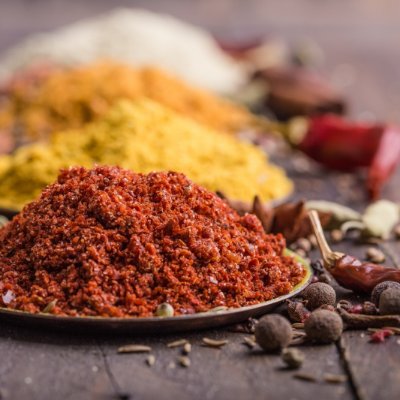 Spicy food is good for many, many things: it can help your digestive system, it can make a nice break of routine, it can awaken visions of far away places.

Oddly enough, the origin of especially hot or varied diets are often countries with a warm climate. Why is that?

Indian, Mexican, Jamaican or African cuisine often feature herbs such as coriander or spices such as chilli peppers. This is not a coincidence. These ingredients (especially coriander) have often been shown to fight inflammation and can help preserve foods, which is something that’s increasingly necessary the hotter the climate.

An often quoted reason is, that spices were used to mask the taste and smell of gone off meat, but that does not seem to be the case.

In hot weather, the one thing we need to do is to cool down quickly. And while a cold swimming pool is arguably the best thing for that, it’s not a particularly viable option for much of the world. This is where the hot and spicy snack can help. The body sweats when we’re subjected to something spicy, especially in the face, which helps us loose the heat faster.

There are exceptions to the rule that only warmer countries use a lot of spice, such as Korea and Japan, where the climate is arguably moderate, and yet the cuisine seems still very reliant on spice. However, it seems this is more of a cultural phenomenon.

And did you ever notice how you seem just not as hungry in the summer as you are during winter? Hot weather can hem our appetite, so it was only a natural reaction to this effect, that people tended to eat foods that stimulate appetite, which spicy food tends to do.

Another reason that seems logical is the ready availability of certain foods in those climates: chili grows in the south, so naturally people would have included it in their diet more readily than northern populations.

This is where globalization really benefitted the food lovers from all over the world: What would we do without our curries and stews, strewn with gorgeous, heart-warming and titillating variety such as our Slow Cooker Rib Ez : Honey Garlic?

Early explorers, such as the Spanish brought new spices and recipes (as well as new, wondrous fruits and vegetables) back from the new world (without them, we would not have tomatoes or potatoes, so there’s that!). These were then spread across the Western world, where demand for the new miracle foodstuffs grew exponentially.

Even before that, ancient trade routes such as the legendary silk road would bring fables and spices back from the far east. As legend has it, these traders used to sell their cinnamon sticks by telling tall tales of giant birds that guarded the aromatic bark shavings with their lives, as they used them as nest-building materials.

Thanks to easy international distribution, those ancient ingredients are now readily available without having to fight birds or monsters, or having to spend months on ships or in caravans travelling through distant lands like thailand, an influence for our A kick in your Thai Seasoning Blend.

Spice influences our cooking, our culture and our eating. From aromatic flavors to flavors that punch! From sweet to spicy, spicese definitely flavor-pack our foods .. and wow! the history beneath!